Less than two years into my term, I am proud to have earned my Master Certification from the Missouri School Boards’ Association on November 01, 2018. As we move toward regaining governance, I believe it is important to learn essential skills and build a strong body of knowledge to draw upon, to ensure a smooth transition. Achievement awards will be presented at the MSBA Annual Leadership Summit in June 2019.

Updated to include: conference photos and coverage from the St. Louis American.

Today, the Missouri State Board of Education livestreamed their June meeting.  Item X. BB on the agenda was a report by Dr. Victor Lenz on the governance of St. Louis Public Schools.  Here is what Dr. Lenz and the other State Board members had to say.

Less than one year after being elected to the St. Louis Board of Education, I became the only current member of either board (elected or appointed) to earn my Advanced Board Member Certification from the Missouri School Boards’ Association. I am dedicated to doing everything possible to prepare for regaining local control of SLPS.

Public schools are stronger with public input, and we must preserve democracy in education.  In November, I composed my first ever resolution for the Board of Education.  At a special session on November 28th, 2017, the Board voted unanimously, with a minor edit, to pass the resolution.  We have an excellent team this year, and all of us are still working to serve the students and citizens of St. Louis City.  You may view our official stance on SLPS governance on the District website or view/download the PDF here.

Thank you for your continued support.

Today, I made phone call to Canada regarding St. Louis Public Schools.

The #SLPSgovernance online survey (more info here), in addition to default accepting multiple submissions from the same person or device, lacks a mechanism for verifying a survey respondent’s authenticity through any form of email, Google, or Facebook account-linking.

Upon contacting Tiffany, Support Agent for MetroQuest, the Vancouver-based company handling the SLPS Governance online survey, I learned some troubling technical details about the data collection and analysis methods.

Instead of implementing backend safeguards to ensure unique data is tied to a specific respondent, the final output is a raw data set exported to an Excel file which is to be manually sorted by Vector Communications‘ data management team, comprised of two individuals.

While IP addresses and timestamps for each entry are included in this Excel output file, the data management team possess unilateral authority for pruning all captured data. These individuals may sort entries by IP address, timestamp, email address, or any other data field, including survey answers, when determining how many duplicate survey submissions to strike or retain for the final data set presented to the Task Force (who will make a recommendation to the SAB on the future of SLPS governance structure).

Vector Communications’ official reason for not requiring email addresses is that the survey yields more participation because, in their experience, requiring an email address causes more people to “give up” at this final step and users do not complete/submit the survey.

“I believe the integrity of this process is further compromised because not only does it allow for manipulation of data, it does not account for our most marginalized citizens. Households who share computers and mobile devices, or people who use public library or school computers, may not necessarily have their opinions counted–meanwhile special interest organizations, particularly those with access to large networks of various IP addresses, may flood the results with numerous submissions. In short, there is excessive room for human error in both the survey response process and data handling.”

“The poll in question accepts data without regard to the source. Meaning the data is not checked for duplicates, or anything that indicates multiple submissions from one user.

What’s more troubling, in my opinion, is any translation of the data after this point is left to an individual or group to determine its veracity. This means the data obtained will be presented in a way determined by that individual or group, which may not necessarily represent the raw data collected; regardless if the data is properly collected or not.”

“There are steps that can be taken to prevent manipulation of an internet poll by a dedicated or interested actor/party. None of those steps seem to have been taken here. No internet poll is completely free from manipulation, but it is possible to make it non-trivial to inflate results, by requiring authentication (even third-party authentication, like log in with Google or Facebook) or having email validation with followup email confirmation.

Again, none of that has been done here. It is therefore both trivially easy to manipulate this poll either manually or automatically (with a simple script) and difficult to track any such manipulation (unless there is cookie information saved, or server-side IP logging, or some other means of at least rudimentarily de-duplicating multiple submissions).

Owing to these flaws, the information obtained from this survey should not be used for any official recommendations.”

The best way to make it more difficult to skew the outcome of the SAB’s governance recommendation process is to complete the online survey.  The survey takes less than five minutes, but allows for long answer comments if you would like to include further opinions.  Survey closes at midnight on November 28th, 2017.

At our June 13 meeting, we held our board officer elections.  I’m honored by the literal vote of confidence I received from my fellow board members who unanimously elected me as Secretary of the Board.  I am proud to serve as the newest member of our board’s leadership team alongside President Susan Jones and Vice President Katherine Wessling who were both unanimously elected to a second term in their positions.  I am committed to transparency, accuracy, accessibility and accountability, and I look forward to remaining St. Louis City’s most eagerly Sunshine Law compliant elected official. 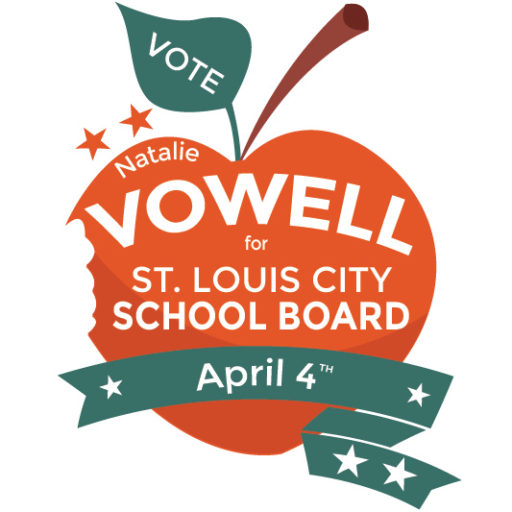 Thank you for your help on our word-of-mouth, organic, grassroots campaign. With no allies in the local big-money institutions, we proved that good intentions, hard work, and dedication can put elections back into the hands of the people: 18,678 people to be exact! This victory belongs not to me, but to all of us—and to the future of St. Louis City.

Whether with your time, talent, or treasure, you all made this happen. Our donors were activists. Our phone bank was our friends list. Every yard sign that went up was for someone like you who personally knows me and my work in the community. Our supporters weren’t just voters; they’re our friends and neighbors.

For those of you who are local, I’d love for you to attend the official swearing-in ceremony at the next school board meeting on May 9th (Carr Lane VPA Middle School, 1004 N. Jefferson Ave, 63106). Afterward, please join us for a black tie optional cocktail party at Livery Company (8728 S. Broadway, 63111) to continue the celebration.

I’m truly humbled by your confidence in me, your belief in my message, and the inspiration you offered along the way.  I’m excited to bring my passion to elected office, and I look forward to serving you and yours for the next 4 years—as a member of the St. Louis City Board of Education.

Children may be our best hope for finding solutions for some of St. Louis’ toughest problems.  The majority of adults who run this city certainly seem to lack a key quality these students possess: empathy.

Sandra Jordan of the St. Louis American writes about one group of SLPS students who designed solutions for the very real issues we face.  We should commend educators who encourage innovation and creative thinking techniques which prepare our youth for solving real world problems. 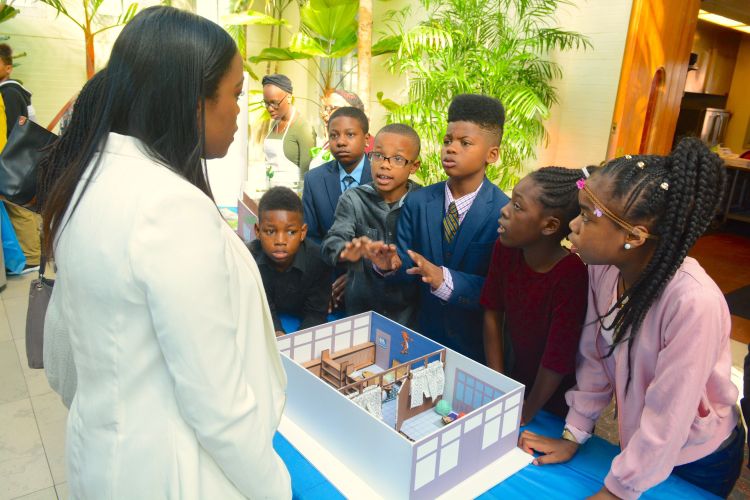 A St. Louis student lived in this northside home, just last year.  Today, it sits vacant and abandoned because our City government punishes people in poverty rather than funding our schools.

The low-income former owners of this home owed no mortgage; the house was paid off decades ago.  They were simply unable to afford their real estate taxes, which provide funding for our schools.  Instead of lowering the taxes to an affordable rate so that the property could remain on the tax rolls and still provide some money for public education, state statute dictates the property be auctioned off.  This is not an isolated, out-of-the-ordinary situation; dozens of northside families in St. Louis City face this same fate every year.

We push low-income homeowners out of their homes, uproot the family, and displace the students, often forcing them to change schools and fall behind on their studies.  Even when a property sent to auction fetches zero bids from auction-goers, the property is given to the St. Louis Land Reutilization Authority by default. Management of the property is then turned over to Eagle Realty, a company owned by a wealthy developer.  Instead of working with homeowners (many of whom inherited these properties as their only asset), Eagle Realty takes taxpayer money—which should go to our public schools—to evict the homeowner and the board the house up.  Yes, we are paying the rich to displace the poor and defund our schools.  As long as we continue boarding up the houses of our most marginalized citizens, we will continue boarding up schools in the neighborhoods that need them most.

This photograph symbolizes so many things wrong with our educational system.  The large sheet of notebook paper encourages our student to perform well on the MAP test, a standardized test which is given at the end of every school year to assess student performance.  It is accompanied by notes on test-taking skills.  The pencil sharpener mounted on the wall suggests a parent who was dedicated to their child’s academic success.  How can we expect our low-income students to achieve high test scores when we treat their families like second-class citizens?

Keeping our neighborhood schools open should be a top priority.  But it seems that St. Louis City prefers to use our schools as warehouses for children in order to fatten the pockets of the privileged and politically-connected, while depriving our kids of the comfort of a stable home environment.  Our children suffer mentally, emotionally, and academically with each and every move to a new housing situation.  Imagine how much worse that trauma is when the Sheriff’s deputies arrive, ordering them to vacate their longtime family home where a lifetime of memories was made.  Imagine how this shapes a child’s view of law enforcement.

It’s time we start investing in our students by keeping SLPS families where they want to be.  We must stabilize our neighborhoods in order to strengthen our schools.